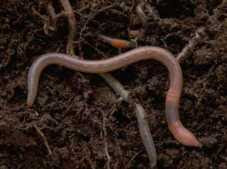 I used the term scientists loosely in the blog post title...


Scientists announced a new discovery about earthworms this week, saying the tiny calcite granules found in their excrement actually contain a detailed record of Earth’s climate history.
In a study published Monday in the journal Geochimica et Cosmchimica Acta, researchers from the University of Reading and the University of York explained that the chalky lumps of calcium carbonate appear to be uniquely marked by whatever temperatures they encountered in the surrounding environment at the time the worm pooped them out.
“There are many conflicting theories about why earthworms produce calcite granules, but until now, the small lumps of chalk-like material found in earthworm poop have been seen as little more than a biological curiosity,” University of York’s Professor Mark Hodson said in an advisory. “However, our research shows they may well have an important role to play, offering a window into past climates.”
This window into past climates is especially helpful to scientists who study climatic patterns, particularly as they relate to global warming. There is no longer a debate in the scientific community as to whether the planet’s annual average temperature is warming due to human activity, but because man-made recordings of the temperature only go back about 150 years there remains some discussion as to whether this warming is without precedent.
Keep on reading…