Stupid: After Asiana Airlines flight 214 crash, these was an announcement saying the plane had safely landed 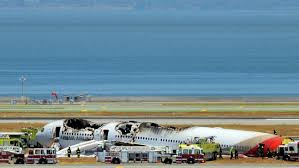 I wonder what Asiana Airlines idea of a bad landing is?

Via ABC and Yahoo:


Hyung said he and his family survived the crash without injury, but he was clearly shaken by the harrowing close call.

"Just minutes before landing, I looked out the window and realized the plane's angle was strangely tilted. The seawater level did not look right," said Hyung, a Korean citizen who lives near Berkeley. His wife is an American citizen.

"Suddenly, the plane's tail part hit the ground and the aircraft bounced upwards and then bam, it hit the ground again. This time it felt like the entire plane hit parallel, but tilted to the left. That pressure was huge. Very strong. I saw luggages fall from the top. And the plane gradually stopped.

"Until then, there was no warning. The drop happened without a warning," he said.

Still stunned by the crash, he said, "We heard an announcement saying the plane has safely landed and everyone should stay put."

Hyung said he put on an oxygen mask that had dropped down and put another on his young son and ran to the door.

"But I was turned back to my seat by the flight attendants. Right when I came back to my seat, I saw smoke and fire outside the right window. The flames were spreading and smoke started to come inside the aircraft. I grabbed my wife and son and ran to the exit door. By then, they had slides ready," he said.