Gun Control Fail: 67 people have been shot during Chicago 4th of July weekend... 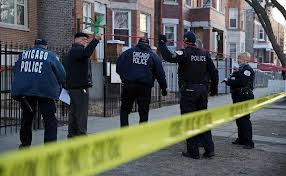 It looks like the criminals in Chicago still have their guns...


Eight people were shot — one fatally — in a drive-by shooting in which two men fired on a group of people at a home in the Lawndale neighborhood Saturday evening, authorities said.
At least one of the shooters used a rifle and casings were recovered at the scene, police said.
At least 67 people have been shot across the city since Wednesday afternoon during this long holiday weekend, 11 fatally.
In Saturday evening’s shooting, four people in serious-to-critical condition and one person in fair-to-serious condition were taken to John H. Stroger, Jr. Hospital of Cook County, while one person in serious-to-critical and one person in fair-to-serious condition were taken to Mt. Sinai Hospital, according to the Chicago Fire Department’s media office.