Karma: Hezbollah in Lebanon is afraid of attacks by suicide bombers... 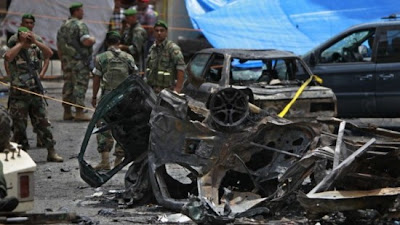 There isn't anybody to cheer for in this conflict...


Fearing suicide attacks against Shi’ite targets in Lebanon, Hezbollah is adopting special security measures. According to Lebanese media reports, the Shi’ite organization has put up both fixed and mobile checkpoints in the heart of Baalbek, a Lebanese city known as a Shi’ite stronghold.

The unusual measures stem from concern about the possibility of bombings, similar to Tuesday’s incident in the Beir el-Abed neighborhood in Beirut’s Dahiyeh quarter during which 53 people were injured when an explosives-laden car exploded.

According to reports, the checkpoints were established near the city’s well-known Shi’ite study hall, or Husseiniya, named after the Imam Hussein. Similar procedures were implemented nearmosques.

Hezbollah is wary of a repeat of Tuesday’s attack and the passage of car bombs and suicide bombers from Syria to Shi’ite areas in Lebanon.

While there was no immediate claim of responsibility for that attack, there have been growing fears in Lebanon that Hezbollah could face retaliation for its now overt role fighting alongside President Bashar Assad’s troops inside Syria, including, activists say, in the embattled city of Homs near the Lebanese border.