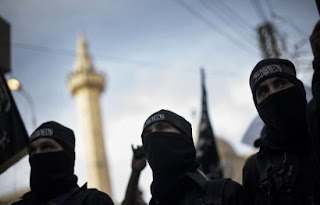 
The leader of the jihadist Syrian rebel group Jabhat Al-Nusra (Al-Nusra Front) has declared that his group is in favor of establishing an Islamic caliphate in civil war torn Syria.
In an audio recorded that has been disseminated over the past several days, Abu Mohammad al-Julani stresses that he strongly opposes parliamentary elections or any political settlement in the country which would be achieved through international intervention.
“Being Muslims, we do not believe in political parties or parliamentary elections, but rather in an Islamic regime based on the Shura (advisory council) and which implements justice … Our heading towards the establishment of Islamic law (Sharia) is jihad in Allah’s way,” Julani says in the recording.
Al-Nusra Front several months ago pledged allegiance to Al-Qaeda chief Ayman al-Zawahiri and has blacklisted by the United States and the United Nations as a terrorist again.
In the recording, Julani is unfazed by his organization being blacklisted and, in fact, says he is proud to be blacklisted by the U.S.