Great: Majority of of Republicans want their party to become more Conservative... 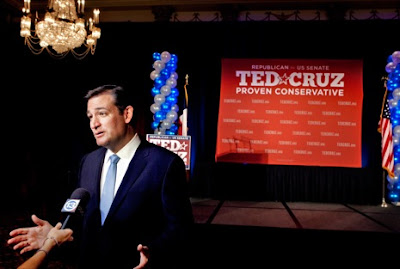 
Nearly two-thirds of Republicans want their party to change its direction, and more than half say they want the party to become more conservative, according to a new poll.
When asked if Republicans just need to make a stronger case on its positions or whether it needs to reconsider some of those positions, 59 percent of GOP voters surveyed in a new Pew Research Center poll said the party needs to reconsider some policies, while 36 percent said it just needed to make a stronger case. Sixty-seven percent said the party needed to address major problems, as opposed to 30 percent who said needed changes were minor.
How the party should move, though, was more split. Just over half, 54 percent, of Republican voters said the party leaders should move in a more conservative direction, while 40 percent said they should be more moderate. [...]
Of prominent GOP figures, Rep. Paul Ryan (R-Wis.) was the most popular, with 65 percent viewing him favorably and 15 percent viewing him unfavorably.
Sen. Rand Paul (R-Ky.) was viewed 55 percent favorably to 19 percent unfavorably, Sen. Marco Rubio (R-Fla.) was favorably viewed 50 percent to 20 percent, New Jersey Gov. Chris Christie was favorably viewed 47 percent to 30 percent and Sen. Ted Cruz (R-Texas) was seen 33 percent favorably to 13 percent unfavorably, with 53 percent saying they had no opinion.