Having solved America's problems, House Democrats want to establish a national historical park on the moon 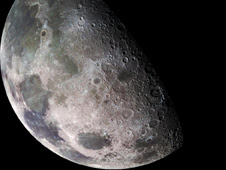 
Two House Democrats have proposed legislation that would establish a national historical park on the surface of the moon to mark where the Apollo missions landed between 1969 and 1972.
The bill from Reps. Donna Edwards (D-Md.) and Eddie Bernice Johnson (D-Texas) would create the Apollo Lunar Landing Sites National Historical Park. The park would be comprised of all artifacts left on the surface of the moon from the Apollo 11 through 17 missions.
The bill says these sites need to be protected because of the anticipated increase in commercial moon landings in the future.
“As commercial enterprises and foreign nations acquire the ability to land on the Moon, it is necessary to protect the Apollo lunar landing sites for posterity,” according to the text of the Apollo Lunar Landing Legacy Act, H.R. 2617.

get real!! and fix our country, we would like our Constitution back the way it was, the bill of right back, leave the gun thing alone, you fix Washington DC and all the corruption that has been going on