Another $100 million Goes Into the Legislative Sausage Grinder 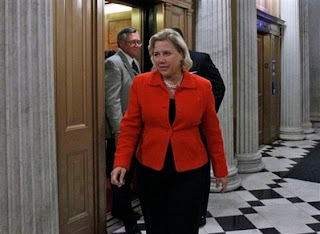 People have been admonished to not watch sausage or legislation being made because it is an unappetizing process. While this may be true, Americans have a responsibility to swallow hard and take a close look at what Congress is doing. They are using hundreds of millions of our tax dollars to buy legislator's votes. This blog previously reported the $200 million in loan forgiveness for veterinarians that was included in the House health care reform bill to secure the vote of Representative Louise Slaughter (D-NY). Now, Harry Reid is spending $100 million to buy secure the vote of Senator Mary Landrieu (D Louisiana.) They have inserted two pages of text into the bill to describe states eligible for a $100 million extra Medicaid subsidy. The language excludes all states except Louisiana. Democrat Mary Landrieu has been wavering in her support for Obamacare. Undoubtedly, Reid can now count on her vote of support Saturday night.

What does it take to get a wavering senator to vote for health care reform?