Obama Arrives In China To Pay Respect To Our Owners 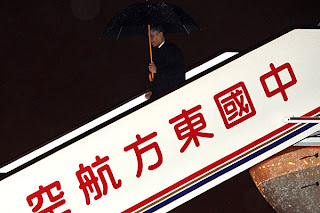 President Obama arrived in China Sunday to pay respects to our Chinese owners.

Late in the evening local time, Obama landed in a rainy Shanghai, eastern China's coastal commercial hub, where he is due to meet city officials and hold a "town hall" session with young people on Monday, before heading on to Beijing.

This is the first visit where a US President will be negotiating from a position of weakness, not strength.

When President Obama visits China for the first time on Sunday, he will, in many ways, be assuming the role of profligate spender coming to pay his respects to his banker.

That stark fact — China is the largest foreign lender to the United States — has changed the core of the relationship between the United States and the only country with a reasonable chance of challenging its status as the world’s sole superpower.

Well i think they should just bag off and let Obama do his thing so far so good. Who care's if he don't twitter it's not like it matters anyways..