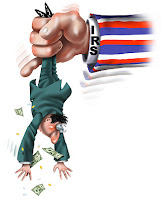 Part of the Stimulus Bill signed into law by President Obama was a weekly tax credit. This was supposed to give Americans $400 per year in weekly increments or $800 for married couples. However, if you worked two jobs, are part of a two income family or worked while collecting Social Security, you may have to pay some of your credit back when you file your 2010 tax return. Some seniors who received the $250 payments sent to more than 50 million retirees in the spring as part of the economic stimulus package may have to pay the entire $250 back.

More than 15 million taxpayers could unexpectedly owe taxes when they file their federal returns next spring because the government was too generous with their new Making Work Pay tax credit.

Taxpayers are at risk if they have more than one job, are married and both spouses work, or receive Social Security benefits while also earning taxable wages, according to a report Monday by the Treasury Department's inspector general for tax administration....