Iranian President Ahmadinejad: US and Israel "don't have the courage" to attack Iran 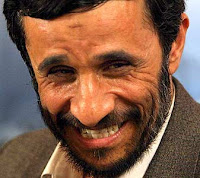 Iranian President Mahmud Ahmadinejad said during a visit to Brazil:

"those you mention (Israel and United States) don't have the courage to attack Iran. They're not even thinking about it."

Ahmadinejad very well may be wrong about the Israelis. However, He may be right about the US as long as Barack Obama occupies the White House. It is clear the Iranians have lost all fear of the use of military force against them. Barack Obama can hint all options are on the table with the Iranians, but nobody in Iran or the US believes him.

"The age of military attacks is over, now we've reached the time for dialogue and understanding. Weapons and threats are a thing of the past," the Iranian told a joint press conference with President Luiz Inacio Lula da Silva, closing his one-day visit.