California AG Brown announced he was conduction an investigation after the release of the Pimp and Hooker sting videos. Unfortunately, he failed to have his investigators visit ACORN offices for days. This is the same as the police calling a drug dealer and telling him they were coming over to check for drugs. What have the ACORN employees been up to while waiting for the investigators to show up? In San Diego County, they threw thousands upon thousands of private and sensitive documents into a dumpster. They were retrieved by a private investigator.

Shockingly, we now learn that the ACORN office in National City (San Diego County) engaged in a massive document dump on the evening of October 9th, containing thousands upon thousands of sensitive documents, just days prior to the Attorney General’s visit.

BigGovernment.com has learned that not only did this document dump occur, but the documents in question were irresponsibly and brazenly dumped in a public dumpster, without considering laws and regulations as to how sensitive information should be treated. 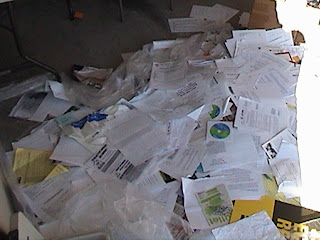 The documents released so far at Big Government contain names, addresses and social security numbers. Beitbart is hinting he has much more. Don't be surprised to see more of these documents released in the days to come. Shredders are about to undergo a sales increase.
Posted by Bluegrass Pundit at 5:46:00 PM

Sure hope Andrew has top-notch body guards!
Wow, I thought Moonbeam was going to investigate those who "busted" Acorn - sometimes it's good to find out you were wrong!