If Eric Holder Was Counting On German Evidence To Try KSM, He Is Out of Luck 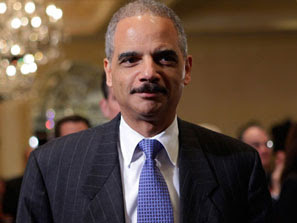 Germany is refusing to allow any evidence they gathered against Khalid Sheikh Mohammed and his co-defendants. Germany will not participate in any trial where the defendant could receive the death penalty.

A German government official says the nation will send an observer to the upcoming trial in New York of the professed mastermind of the Sept. 11, 2001, terror attacks and four accused henchmen.

Justice Ministry spokeswoman Katharina Jahntz on Saturday confirmed a report in Der Spiegel that a German observer would attend the trial to ensure that no evidence provided by Germany would be used to apply the death penalty.

Three of the four suicide pilots who carried out the attacks had lived and studied in the northern German city of Hamburg. Germany, like the rest of Europe, except for Belarus, does not execute criminals.