Jesse Jackson: "You can't vote against healthcare and call yourself a black man" 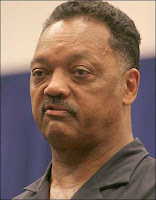 Jesse Jackson is a big believer in diversity, except when it comes to political opinions. According to Jackson, you can't be both black and a conservative.

“We even have blacks voting against the healthcare bill,” Jackson said at a reception Wednesday night. “You can’t vote against healthcare and call yourself a black man.”