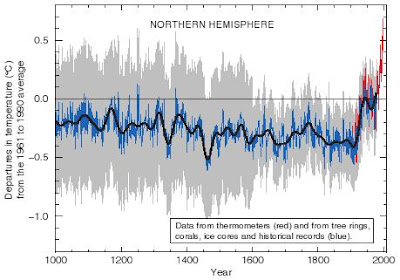 The infamous 'Hockey Stick" graph. (above)

Dr. Michael Mann is the co-author of the famous “hockey stick graph” of temperature trends. He has been implicated in the hacked emails implicating Hadley CRU, authors of the Hadcut record, in hiding data contrary to global warming and trying to suppress critics. Here is one of the emails addressed to Dr. Mann,

Dear Ray, Mike and Malcolm,
Once Tim’s got a diagram here we’ll send that either later today or
first thing tomorrow.
I’ve just completed Mike’s Nature trick of adding in the real temps
to each series for the last 20 years (ie from 1981 onwards) amd from
1961 for Keith’s to hide the decline. Mike’s series got the annual
land and marine values while the other two got April-Sept for NH land
N of 20N. The latter two are real for 1999, while the estimate for 1999
for NH combined is +0.44C wrt 61-90. The Global estimate for 1999 with
data through Oct is +0.35C cf. 0.57 for 1998.
Thanks for the comments, Ray.

It is unclear exactly what "Mike’s Nature trick" is, but it appears to help hide the temperature decline. This looks very damning to Dr. Mann.
Posted by Bluegrass Pundit at 7:56:00 PM

What i do not understood is in fact how you are no longer actually much more smartly-appreciated than you may be now.
You are very intelligent. You realize therefore significantly in
relation to this subject, produced me in my view imagine it from so many various angles.
Its like women and men don't seem to be involved unless it is something to accomplish with Woman gaga! Your individual stuffs nice. Always deal with it up!