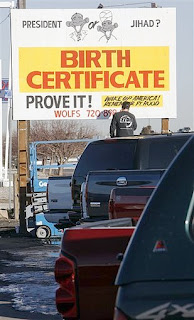 A car dealership in Denver has put up a billboard comparing President Obama to a Jihadist. The billboard also says “BIRTH CERTIFICATE PROVE IT” and "WAKE UP AMERICA! REMEMBER FT. HOOD!" The dealer reports his employees have been called names and threatened in phone calls.

The billboard in Wheat Ridge shows a cartoonish Obama wearing a turban. The billboard says, "PRESIDENT or JIHAD?"

The words "WAKE UP AMERICA! REMEMBER FT. HOOD!" appear on the bottom....

The man behind the sign is either an idiot, crazy or a racist (maybe all three). We won the election and now these sore losers will continue to spew their lies. They remind me of the Birthers losers, who even Bill O’Reilly have smacked down like true flies.