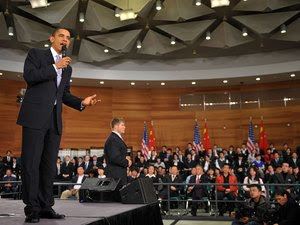 At a town hall with Chinese students President Obama said,

"I'm a big supporter of non-censorship," Obama said. "I recognize that different countries have different traditions. I can tell you that in the United States, the fact that we have free Internet — or unrestricted Internet access — is a source of strength, and I think should be encouraged."

Of course, most Chinese didn't hear these words because censors kept them from seeing the town hall.

The town hall meeting was one of the few unscripted moments on the president's trip. It was supposed to be carried live on Chinese state television but at the last moment, the Chinese government changed its mind and only local stations in Shanghai, and the White House Web site, carried it live.

Obama should have expected this. After all, the Chinese censored part of his inaugural address in January.

BEIJING — President Obama’s 18-minute Inaugural Address on Tuesday was generally lauded by Americans for its candor and conviction. But the Chinese Communist Party apparently thought the new American president’s gilded words were a little too direct.

China Central Television, or CCTV, the main state-run network, broadcast the address live until the moment Mr. Obama mentioned “communism” in a line about the defeat of ideologies considered anathema to Americans. After the translator said “communism” in Chinese, the audio faded out even as Mr. Obama’s lips continued to move.

"The audio faded out even as Mr. Obama’s lips continued to move." Many Americans have wished for that moment.
Posted by Bluegrass Pundit at 7:39:00 PM