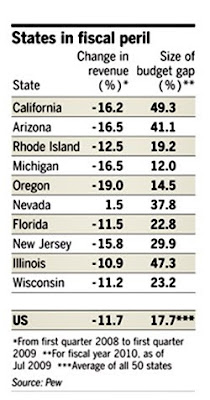 High unemployment, reduced tax revenues and demands from generous social programs are severely straining state budgets. Much of the early stimulus money went to bail out struggling state governments, but most of that money is gone now. The ten states in danger of imminent bankruptcy are California, Arizona, Rhode Island, Michigan, Oregon, Nevada, Florida, New Jersey, Illinois and Wisconsin. Nine of the ten states voted for Barack Obama in 2008. Of the group, only Arizona voted for John McCain. Arizona is McCain's home state. The states in peril hold one third of the US population.

The 10 states, accounting for approximately one-third of the U.S. population, face declines in tax revenue as unemployment now officially tops 10 percent and budget gaps that mean higher taxes loom in the future. State government officials have been laid off, key social services including prisons and police are strained and schools have been closed.