Obama's 'Christian' Grandmother Has Arrived In Mecca For The 'Hajj' 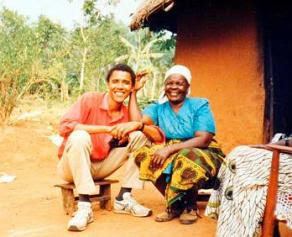 During the 2008 Presidential Campaign, there were rumors Barack Obama was a Muslim. Obama denied these rumors and claimed he is a Christian. He did attend a Chicago church led by the radical Rev. Wright for 20 years. There was a strong attempt to debunk the "Obama is a Muslim" rumor. During this time period, AP ran a story supporting Obama's claim to be a Christian and identifying his Paternal Grandmother as a Christian.

Obama's grandfather had converted to Islam from Roman Catholicism and taken the name Hussein, Sarah Obama said, but his children had inherited only the name, not the religion. Each person should be able to choose how they worshipped, she said.

"In the world of today, children have different religions from their parents," she said. She, too, is a Christian.

Now, we learn Obama's 'Christian' Grandmother has arrived in Saudi Arabia for the 'Hajj.' The 'Hajj' is a holy pilgrimage to Mecca all Muslims are required to make and is one of the five pillars of Islam.

Mecca, 25 Nov. (AKI) - The grandmother of US president Barack Obama has arrived in Saudi Arabia for the 'Hajj' or Islamic pilgrimage to the holy cities of Mecca and Medina, a Saudi daily said on Wednesday. Sarah Obama, 87, is being accompanied by a nephew and Obama's cousin, Omran.

On Wednesday Sarah Obama was in the valley of Mina with an African delegation, according to the Saudi daily Okaz.

Why would a 'Christian' make the pilgrimage to Mecca?

"Why would a 'Christian' make the pilgrimage to Mecca?"

They wouldn't. The MSM lied about her religion. She is a Muslim. The point is the depths of deception the lame stream media will go to to try to protect "O." Obama could not have won the election w/o the almost fanatical support of the MSM (except FOX.)

Folks, we have an imposture in the White House. The truth is there for everyone to see. The oligarchs just sit and laugh at the little people thinking... see how they run.

"Why would a 'Christian' make the pilgrimage to Mecca?"

She could NOT attend the haj as a non-muslim.

I, frankly, dont care; however, the same "progressives" diagnosing islam-o-phobia prevent the fact she appears to, in fact, be muslim from reaching the public.

I wouldn't believe Obama if he told me the world was round.

You have to take just about everything from the MSM and flip it 180 degrees to be in the neighborhood of the truth.
More and more are waking up to the fact that: "The truth is dead. Long live The Truth."
Stuntman Mike - protest music composer

I thought his Grandmother died just around election time?

Why would a Christian go to Mecca? To see how the Muslims worship their God of course.

Sarah Obama is not Barack's true grandmother. She is the third wife of his grandfather.
Barack Obama was born to the second wife, Habiba Akumu Obama. She too is a muslim, but the quote from the article is not about her.

I never knew that muslims allow thier children to choose what religion they follow,how very democratic.

Jews, Christians, Muslims are all of 'The Abrahamic Faith'. Branches on the same tree.

Frankly whilst I find the idea that Barky has lied about even his religion or at least that from which he arives to be damning, and an indication of an unfit man, for the job on honesty alone, I am more disgusted with the bigots and cretins who who automatically pretend that being Muslim is something bad or to be ashamed of. You mondless bigots, you disgust me about as much as this weak, Zionist puppet usurper from Kenya does.

Given that George 'Dubya' Bush was the last BEST CHOICE for POTUS, you had to expect outsourcing to cath up, its just a pity that your first "outsourced" president, from Kenya, was no better than the home grown mnoron from last time.

Hugo Chavez, President, 2012...
"-because citizenship no longer figures in!"

Daniel 2:41: And whereas thou sawest the feet and toes, part of potters' clay, and part of iron, the kingdom shall be divided; but there shall be in it of the strength of the iron, forasmuch as thou sawest the iron mixed with miry clay.
2:42: And as the toes of the feet were part of iron, and part of clay, so the kingdom shall be partly strong, and partly broken.
2:43: And whereas thou sawest iron mixed with miry clay, they shall mingle themselves with the seed of men: but they shall not cleave one to another, even as iron is not mixed with clay.
2:44: And in the days of these kings shall the God of heaven set up a kingdom, which shall never be destroyed: and the kingdom shall not be left to other people, but it shall break in pieces and consume all these kingdoms, and it shall stand for ever.
2:45: Forasmuch as thou sawest that the stone [Christ - Christianity] was cut out of the mountain without hands, and that it brake in pieces the iron, the brass, the clay, the silver, and the gold; the great God hath made known to the king what shall come to pass hereafter: and the dream is certain, and the interpretation thereof sure.

I wonder, is she going to kiss the Shiva Linga in the Kaaba?

Odd isn't it that nowhere else do Muslims do the tawaf. (circle seven times)

Isn't the "haj" in fact taken from the Hindu "Okaj?"

Isn't Ibrahim actually a corruption of the word, Brahma?

Isn't the name of the holiest of Muslim cities Mecca and Medina from the Sanskrit words Makha-Medini which means the land of
Fire-Worship?


Whatever you are imbibing has seriously affected your perception.

Obama, You Scare Me

...and not because you are a Muslim or not, but because I know nothing about you.

Obama is the among the best potus we have had. All this unjustified criticism is based on racism which has sadly reared its ugly head again.Would we want another Dubya ?

if Granma is Muslim then how come the lies;as if it should matter;she did not run for President.The main point is simply why lie unless there is a reason to lie.Obama church in Wrightsville must be considered rather radical;just as bad as radical islam.The lies people tell are the important thing;lies conceal the truth.why conceal obama's granmothers religion..?aRE COMPULSIVE LIARS OF JUST ONE RELIGION?