Obama said Iran is "running out of time." Threatens to send them to bed w/o their milk and cookies. 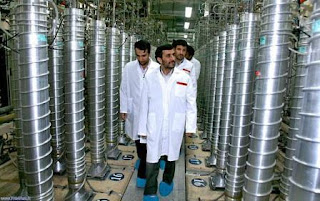 President Obama said Sunday, "we are now running out of time" for Iran to agree to a deal to ship its enriched uranium out of the country for additional processing. US President Obama and Russian President Dmitry Medvedev hint more sanctions could be enacted. Currently there are three sets of sanctions against Iran. Most people consider these sanctions to be ineffective.

The United States and its allies believe Iran is using its nuclear program as a cover for building a bomb. Tehran says it only wants to build nuclear reactors to generate electricity.

"We have to continue to maintain urgency and our previous discussions, confirming the need for a dual-track approach, are still the right approach to take. We will begin to discuss and prepare for these other pathways," Obama said.