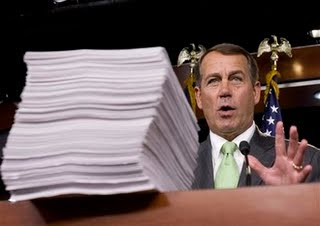 President Obama and Democrats claim we need health care reform to stem rising costs. The chief actuary for the Centers for Medicare and Medicaid Services at the DHHS has analyzed Pelosicare and found contrary to Democrats claims, the bill actually increases costs by $289 billion over a decade.

Democrats have promised that health reform would reduce health care costs, but legislation the House passed last week would increase costs over the next decade by $289 billion. By 2019, health costs would rise to 21.1 percent of GDP compared to 20.8 under current law, according to an actuarial report prepared by the Centers for Medicare and Medicaid Services.