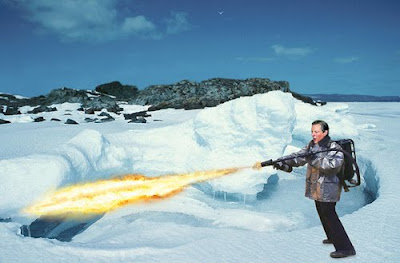 The HadCrut record is one of the four official sources of global temperature data used by the IPCC. It is put out by the University of East Anglia’s Climate Research Unit (aka Hadley CRU.) Hadley CRU had their computers hacked and their emails were published on the internet. Their emails indicate they are publishing fraudulent data and suppressing critics. Another leg has been knocked out from under the global warming fraud.

Conspiracy, collusion in exaggerating warming data, possibly illegal destruction of embarrassing information, organised resistance to disclosure, manipulation of data, private admissions of flaws in their public claims and much more.

The Telegraph published some emails:

But perhaps the most damaging revelations – the scientific equivalent of the Telegraph’s MPs’ expenses scandal – are those concerning the way Warmist scientists may variously have manipulated or suppressed evidence in order to support their cause.

Here are a few tasters. (So far, we can only refer to them as alleged emails because – though Hadley CRU’s director Phil Jones has confirmed the break-in to Ian Wishart at the Briefing Room – he has yet to fess up to any specific contents.) But if genuine, they suggest dubious practices such as:

I’ve just completed Mike’s Nature trick of adding in the real temps to each series for the last 20 years (ie from 1981 onwards) amd from 1961 for Keith’s to hide the decline.

Private doubts about whether the world really is heating up...