Al Gore: Global Warming Skeptics and Tea Partiers are all "extremists" or something 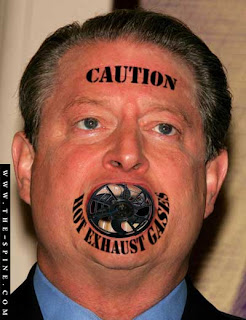 The Groacle took time off saving the planet to fund-raise for the Democratic Congressional Campaign Committee (DCCC). He spent his time attacking Republicans who are anthropogenic global warming skeptics Tea Partiers.

“Single-minded proponents of a dangerous and extremist agenda are working feverishly to roll back every Democratic gain we’ve ever made,” Gore says in an e-mail on behalf of the Democratic Congressional Campaign Committee (DCCC).

“The Tea Partiers now calling the shots in the Republican Party won’t back away from their radical agenda.”

It’s not the first time the former vice president has used such rhetoric. In a July 25 blog post, Gore wrote about the dangers of “ideological extremists” in the GOP and Tea Party who balk at raising the nation’s debt ceiling. He compared them to skeptics of climate change.

Gore is asking for donations of $3 or more, so the DCCC can have a good financial showing for the month of September.

The ONLY way he is even able to come up with these attacks is by staring at HIMSELF in the mirror....