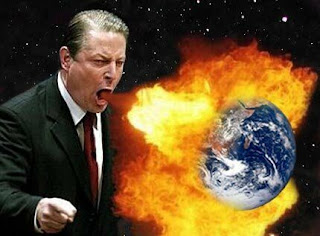 Al Gore just finished his “24 Hours of Reality” Goracalathon to revitalize the global warming climate change cult cause. It doesn't appear President Obama was watching. There is little doubt that President Obama still wants to use the unfounded fear of anthropogenic global warming as a hammer to force his left-wing agenda down Americans throats, but he is painfully aware of the political realities and their impact on his 2012 re-election chances. It doesn't appear Al Gore made much headway with anyone in his full court press to keep making millions off this scam save the planet. Even Al Gore's fellow global warming activists and environmental allies dissed the show. Some people are even wondering if Al Gore is now a hindrance to the global warming cause.


The Environmental Protection Agency is again delaying a plan to curb greenhouse-gas emissions from power plants, saying it needs more time to propose the rule. The move comes amid intense pushback from business groups and Republican lawmakers who complain a recent slate of EPA proposals are chilling business investment and hindering the economic recovery. “I am very pleased by today’s announcement that one of EPA’s most economically damaging rules will be delayed,” Oklahoma Republican Sen. James Inhofe said in a statement, adding that Republicans would work to block other EPA rules from coming into effect. –The Wall Street Journal, 15 September 2011

Well this certainly is good news, but NEVER let your guard down against the EPA (or any other federal agency) of the current occupant's administration-- they will use "any means necessary" to stop, halt, delay ANY plans by private business to produce energy from traditional sources.