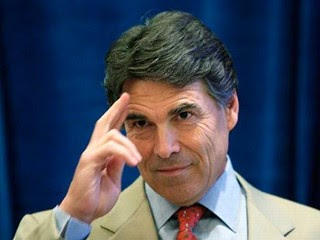 This is why Gov. Rick Perry is beating Mitt Romney in the poll. Republicans are tired of leaders 'pussyfooting' around. Romney refuses to use the term 'Socialist' to describe President Obama or his policies. Rick Perry isn't pulling any punches.


(NY Times) — In an interview with Time magazine, Gov. Rick Perry showed that he had no intention of softening the cactus-thorned rhetoric he developed during his decades in Texas politics, notably repeating his characterization of President Obama’s policies as “socialist.”

“Look, when all the answers emanate from Washington, D.C., one size fits all, whether it’s education policy or whether it’s health care policy, that is, on its face, socialism,” Mr. Perry told Time’s Richard Stengel and Mark Halperin.

In 2009, Mr. Perry told a Republican group in Texas that the Obama administration is “hell bent on taking America towards a socialist country.” This year, as he faces charges from his rivals for the Republican nomination that his positions are too extreme to win the general election, Mr. Perry said he will not change the way he speaks to appeal to the nation as a whole.

He also refused to back down from his characterization of Social Security as a “Ponzi scheme.”

“American citizens are just tired of this political correctness and politicians who are tiptoeing around important issues,” he said. “They want a decisive leader.”

Perry to Obama: "Your'e a SOCIALIST"