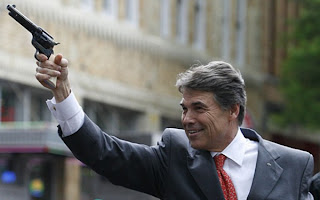 
According to the survey, which was released Monday, 28 percent of Republicans and independents who lean towards the GOP say they support Perry as their party’s presidential nominee, with Romney at 21 percent. Former House Speaker Newt Gingrich is at ten percent, with Rep. Ron Paul of Texas, who’s making his third bid for the White House, former Godfather’s Pizza CEO and radio talk show host Herman Cain, and former Alaska Gov. Sarah Palin, all at seven percent. The poll indicates that Rep. Michele Bachmann of Minnesota is at four percent, with former Sen. Rick Santorum of Pennsylvania at three percent and former Utah Gov. and ambassador to China Jon Huntsman at one percent.

Not sure about Perry