PETA on being eaten by sharks: ‘Payback is Hell’ 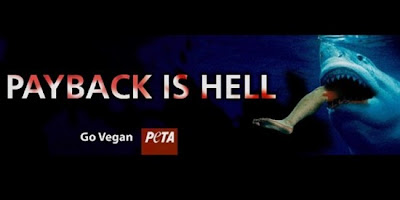 The blockheads at PETA have really outdone themselves this time. They should have stuck with the naked protests.


(Daily Mail) — They are well known for their shocking adverts with some of the world’s most famous people posing naked to help boost their animal rights message.

But this time PETA may have gone too far with its latest campaign, which suggests those who swim or fish in waters containing sharks are attacked or killed as ‘payback’.

The new poster shows a shark eating a severed human leg and the blood-stained slogan ‘Payback is Hell’, which aims to shock people into turning vegan.

PETA say that in particular they hope it will make people rethink fishing, suggesting if people inflict pain on sealife they deserve it themselves.

PETA are morons, being a vegeterian is no protection against sharks.

Payback is hell indeed, especially if the one being eaten by a shark had ANY past record of either donating to, or as a member of, PETA.....