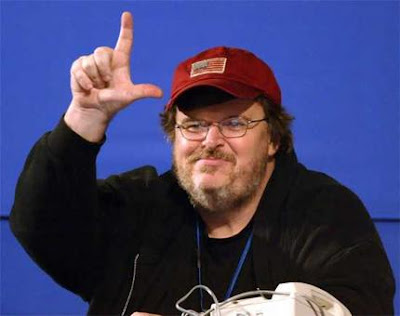 What Michael Moore meant to say was it's not socialist, but that term is being avoided by the left like it was a drug resistant venereal disease. If Michael Moore hates our country and economic system so much, why doesn't he relocate to the workers paradise of Cuba?


(Washington Examiner) — Documentary film maker Michael Moore blasted the capitalist economic system — the one that reportedly made him $50 million — and called for the arrests of Wall Street bankers in an interview with Piers Morgan this evening.

Morgan showed a video of Moore earlier in the evening, protesting on Wall Street, saying that capitalism “is about the upper one percent owning the majority of this country and everyone else scrambling for the crumbs . . . It’s not democratic.” During the Morgan segment, Moore said that the wealthy on Wall Street are “getting away with a huge crime” because “no one has been arrested” from Wall Street banks “for the crash of 2008.”

Morgan asked Moore about his opposition to capitalism, especially given Moore’s financial success as a filmmaker. When asked if his movie-making amounted to a capitalist endeavor, Moore replied “Is it really?”. . .

As Moore concluded his remarks on capitalism, he said that “it’s not American.” Similarly, he said “it’s not Christian, it’s not Jewish” or in conformity with any other major religion, insofar as capitalism neglects the “46 million” poor people struggling in American society.
Keep on reading…

We live in a REPUBLIC.

Maybe Mr Moore needs to be educated on what the difference is between a REPUBIC and a Democracy.

I heard an analogy on this earlier this morning on my way home from work.

Andrew Wilkow (make sure you spell it right), stated this as the difference between the two.

A Democracy would allow 3 rapists and 2 women to decide sexual assualt laws.

Get it now Mr Moore?