Obama to Congressional Black Caucus: Shut Up and March With Me 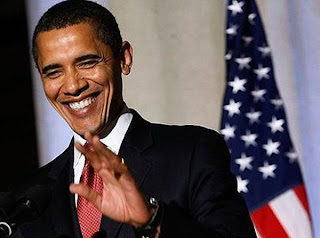 The first black President tells the CBC to ignore the damage is doing to black Americans and "march with me, and press on...” If they have two brain cells to rub together, they will ignore Obama's plea and abandon this charlatan. Obama isn't a good president for any American of any color. He is destroying the economic prosperity of this country by pursuing a Socialist anti-business agenda and class warfare.


Washington (CNN) — While acknowledging the hard-hit black community and budding criticisms in its ranks, President Barack Obama said in a speech Saturday night to the Congressional Black Caucus that he wouldn’t give up — and urged members of the black community to join him to jump-start the still sluggish economy.

“I expect all of you to march with me, and press on,” Obama said. “. . .Stop complaining, stop grumbling, stop crying. We are going to press on. We’ve got work to do.”

The unemployment rate among African-Americans is 16.7%, nearly double the national average. That fact has made fiscal reforms a priority for caucus members, some of whom — most of them Democrats — have criticized the president for not doing enough on the issue.