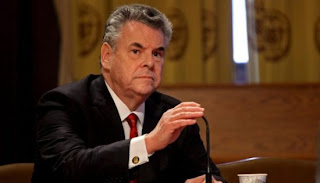 As a special bonus, this was a Democratic poll. I doubt this was the result they were hoping for.


(TheDC) — While New York Republican Rep. Peter King’s recent hearings on radicalization have sparked controversy among interest groups and in the media, a recent poll shows that a majority of Americans are supportive of his efforts.

According to a national poll of 1,000 likely voters conducted last month by Democratic pollster Pat Caddell and Republican pollster John McLaughlin for Secure America Now, 63 percent of Americans support the King hearings and believe “they need to continue because they are providing information which is valuable and important to stop terrorism in the United States.”

Twenty percent said the hearings should be discontinued because “they are offensive to Muslims and a waste of tax payer dollars.” Seventeen percent did not know, or refused to answer.