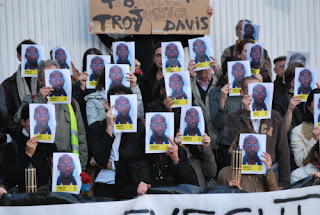 President Obama reportedly took a break from raising campaign cash trying to create jobs in an attempt to save the life of convicted cop killer Troy Davis.


ATLANTA, Sept. 26, 2011 — President Obama candidly Friday took a little time to explain how he tried to save Troy Davis and why he did not say anything about his controversial execution, two sources told Redding News Review.

Obama’s White House spent “three days” looking at how it could legally get involved in the case on a federal level, one source said. The Obama administration even called the state of Georgia about getting involved and were told “No”.


“‘We looked at every possible avenue legally,’” the source reported Obama said. “‘There was not one there.’”


“‘It was a state case and I could not intervene because it wasn’t federal,’” another source reported Obama said.


The two sources told Redding News Review that Obama talked about Davis, during a private lunch meeting of about 10 select black broadcasters.

Obama sure has strange priorities. Find a way to pardon convicted cop killer? Check. Keep guns away from cop killers? Not interested.