New Warmist Theory on Why Warming Has Stopped: The Oceans Are Sucking Up Global Warming or Something.

Credit: NASA
As you can see from the above graph, global warming paused or ended around 1998. Warmist climate scientists have struggled to explain why this is when CO2 is still climbing rapidly. An increase in CO2 should correlate to an increase in temperature according to their models. That isn't happening recently. A previous attempt to explain this discrepancy was the claim sulfur emissions from coal burning plants in China were holding back global warming. The duplicity of claiming coal plants both caused (CO2) and prevented(sulfur) global warming was enough to make most of us shake our head in bemusement. Since that theory didn't fly, a new theory was quickly needed. Here it is. Global warming is being sucked up by the oceans.(accent is mine)


ScienceDaily — The planet's  deep oceans at times may absorb enough heat to flatten the rate of  global warming for periods of as long as a decade even in the midst of  longer-term warming, according to a new analysis led by the National  Center for Atmospheric Research (NCAR). 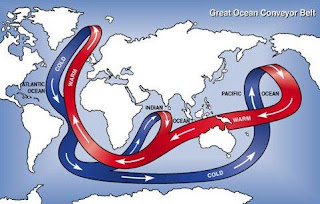 The study, based on computer simulations of global climate, points to  ocean layers deeper than 1,000 feet (300 meters) as the main location  of the "missing heat" during periods such as the past decade when global  air temperatures showed little trend. The findings also suggest that  several more intervals like this can be expected over the next century,  even as the trend toward overall warming continues.

"We will see global warming go through hiatus periods in the future,"  says NCAR's Gerald Meehl, lead author of the study. "However, these  periods would likely last only about a decade or so, and warming would  then resume. This study illustrates one reason why global temperatures  do not simply rise in a straight line."

The research, by scientists at NCAR and the Bureau of Meteorology in Australia, is published online in Nature Climate Change. Funding for the study came from the National Science Foundation, NCAR's sponsor, and the Department of Energy.

Yes you read the second accented part correctly. Climate fraudsters scientists are using a computer model to explain why their other computer model isn't performing as expected.
Posted by Bluegrass Pundit at 8:04:00 PM