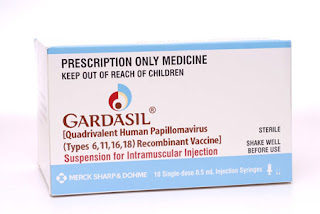 The short answer is no. The long answer is also no. It is true that trying to implement this vaccine regime by EO was wrong. Perry readily admits that mistake. However, the vaccine is actually a good idea. It is not an assault on innocent 12-year old girls as Michelle Bachmann claimed. It also does not cause retardation as Michelle Bachmann misinformed the American public. The misconception in many people's mind is, since HPV is a sexually transmitted disease, the government is preparing 12 old girls for sexual activity at an early age. That is false. In order for this vaccine to work correctly, it has to be given at that age. The protection they get is a few years down the road. Waiting until the girls are adults and can make their own informed decision will not work. It will be too late for them to take advantage of this potentially lifesaving vaccine. Heather Borden Herve over at Wilton Patch explains:

HPV is also the most common sexually transmitted disease today.

A-ha! Is that what makes this issue hot and—pardon the media parlance pun—sexy? Because somehow when the topic of “innocent little 12 year old girls” gets mixed up with protecting them from a virus that gets transmitted through sexual contact, it suddenly gets to be co-opted by politicians on the basis of protecting moral values—and it gets them airtime.

In full disclosure, I grew up in a household that was comfortable talking about science, medicine and fact. My dad is an OBGYN, so we weren’t afraid of using correct anatomical terminology or talking about human sexuality. It’s formed the basis for the way I approach issues like this one.

The science shows that in order for this vaccine to work it needs to be administered before a person becomes sexually active. According to a statement released by the American Academy of Pediatrics following the media uproar after Bachmann’s comments, they “recommend that girls receive [the] HPV vaccine around age 11 or 12. That’s because this is the age at which the vaccine produces the best immune response in the body, and because it’s important to protect girls well before the onset of sexual activity.”

That recommendation was echoed by the CDC and American Academy of Family Physicians....

"The American Academy of Pediatrics would like to correct false statements made in the Republican presidential campaign that HPV vaccine is dangerous and can cause mental retardation. There is absolutely no scientific validity to this statement. Since the vaccine has been introduced, more than 35 million doses have been administered, and it has an excellent safety record."

A better approach for Gov. Perry would have been to offer the vaccine for free and promote it to parents through a public education program, but hindsight is always 20-20. BTW, the story about Rick Perry sitting at the deathbed of a friend dying of cervical cancer is true. Here name was Heather Burcham.

This isn't just a woman's issue. HPV is also a major risk factor for penile cancer.
Posted by Bluegrass Pundit at 7:04:00 AM

Bachmann really stepped in it on this one.

Til I am the last man standing said...

Dear Blugrass Pundit; FYI, your article takes liberties with the FAQ the CDC has put out on Gardasil.

Til I am the last mant standing

PS: You also can't believe what the CDC says.

PSS: Thought I'd let you know what the FDA says about your comment about age and immune system:

"Two studies were also performed to measure the immune response to the vaccine among younger females aged 9-15 years. Their immune response was similar to that found in 16-26 year olds, indicating that the vaccine should have similar effectiveness when used in the 9-15 year age group."

To: Til I am the last man standing

Gardasil is a series of three shots that are given over a period of months (8 mo. is the recommended period). Full protection isn’t achieved until the entire series has been given. It isn’t a last minute decision. That is why it should be given before sexual activity begins. The claim it wears off in 5 years is unfounded. Gardasil only has studies for 5 years of protection. It is not yet known how long the vaccine offers protection. The vaccine may protect for life or require a booster shot.