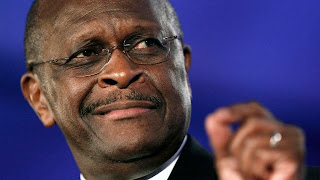 If you need proof Republicans and Tea Partiers are not racist, this straw poll is ample evidence. Conservatives will support a conservative candidate. Race has nothing to do with it. Cain has impressed many Republicans with his solid debate performances and strong conservative principles. Tea Party opposition to President Obama is rooted in Obama's liberal background and policies, not his color. Perry came in second and Romney third.

“Tonight’s winner is Herman Cain,” Florida Gov. Rick Scott announced. “It shows you something, the road to the White House come through Florida, and it pays to spend time here.”
He received 37 percent of the more than 2,600 votes cast.

“Thank you to the Republican voters for this incredible honor of being named the winner of the Presidency 5 straw poll in Florida today,” Mr. Cain said. “This is a sign of our growing momentum and my candidacy that cannot be ignored. I will continue to share my message of ‘common-sense solutions’ across this country and look forward to spending more time in Florida, a critical state for both the nomination and the general election.”