Doubling Down on Dumbness 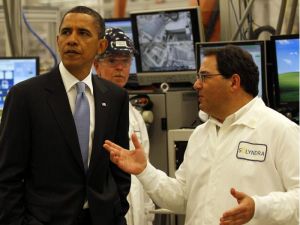 Why can't the Obama administration learn from their mistakes? Democrats have lost Governorships, control of the House, several Senate seats and lost ground in many statehouses since President Obama was elected. Obama isn't leading the country in a direction the majority of citizens want to go. Unfortunately, Obama, Harry Reid and Nancy Pelosi are too ideological to take a pragmatic course and turn towards the center. The recent Solyndra scandal is just another example of the inflexible ideological nature of the current Democratic regime in Washington. The Solyndra loan debacle has likely cost tax payers over a half a billion in dollars. It was never a viable business plan. Solar cells can be made much cheaper in China. Many wind turbines are also made in China. The truth is most of the new 'so called' green jobs are going to China. President Obama is desperate to change that, but building a plant where it costs $6 to make a product that sells for $3 won't work. Team Obama hasn't learned this lesson yet.


The Obama administration is doubling down on its support for renewable energy, stressing that it will move forward on more loans like the one to Solyndra, the California-based company that announced its bankruptcy late last month. In fact, as many as 14 new loan guarantees from the Energy Department — nine of which are for solar projects — could be finalized by the end of the month.

But congressional Republicans have signaled they’re prepared to start a huge political fight with the White House over the investments. The fight could be a major campaign theme next year, particularly since the loans are tied to the 2009 economic stimulus package the GOP already believes is a political liability for President Obama...

Republicans ratcheted up their criticism of the administration over Solyndra this week, releasing a series of emails they say show that the White House tried to rush a final decision on the company’s financing so that Vice President Biden could announce approval of the loan guarantee at the September 2009 groundbreaking for the company’s new factory.