Jay Carney: Obama will run or his record of saving the American economy

I don't know whether to laugh or cry.

MR. CARNEY: I think, again, what he said is that it will be — it’s legitimate, and I think every elected official who’s running for office in 2012 will run on his or her record. And this President and Vice President will run on their record of saving the American economy from a great depression, of reversing the kind of dramatic contraction in the economy and dramatic job loss that we saw, and beginning to build a foundation for the kind of competitive economy that we absolutely must have in the 21st century for us to succeed and for America to continue to be the kind of America that we want it to be. 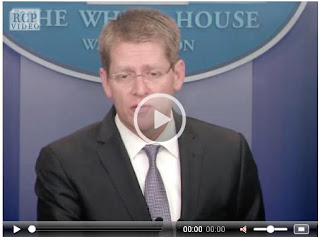 You have to admire Carney's loyalty and the degree of delusion/self-deceit these people live under. I would never have the balls to get up in front of the press and say such complete and utter nonsense.