Golfer-in-Chief hits the links with Bubba 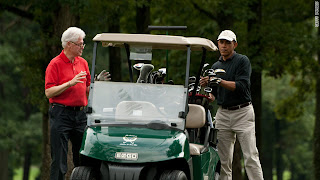 I suppose they will be trading cigar stories discussing Bill Clinton's opposition to raising taxes in the middle of a recession.


(The Hill) — President Obama headed to Andrews Air Force Base on Saturday for a round of golf with one of the few people who might have some idea of the difficulties the president has been facing: Former President Bill Clinton.

The paring of Clinton and Obama is a symbolic one for the White House, after Clinton critiqued Obama’s jobs plan earlier this week by arguing tax increases should wait until after the economy recovers.

“It’s okay with me. I’ll pay more. But it won’t solve the problem,” the former president said, arguing that the government shouldn’t raise taxes — or pursue spending cuts — “until we get this economy off the ground.”

But the former president later told the Associated Press that he thinks Obama has been doing a “good job,” and hopes that a book he plans to release in November — in which he will advocate the importance of government spending on infrastructure, technology, and green energy — will help bolster Obama’s success.

“I hope I can do things in this book that a president doesn’t have time to do and shouldn’t be doing,” Clinton told the AP.

Since the Zipper has taken it upon himself to invoke the name of GOD in his rhetoric (see his quote re: Middle East peace: "...God must not want peace there..."), then 2 can play that game: GOD must not want the USA to have a good economy, under the current occupant.