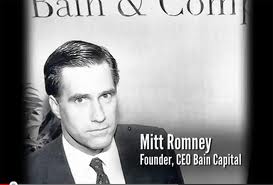 President Obama has spent 10's of millions of dollars on his Bain Capital attack against Romney. It has been a complete failure. Unfortunately for the Obama campaign, they don't have another major card to play. Romney appears to be squeaky clean. They could attack him for being a flip-flopper, but most of the issues he has flip-flopped on would make Independents and even Democrats more likely to vote for him, not less.

By more than 2-1, 63%-29%, those surveyed say Romney’s background in business, including his tenure at the private equity firm Bain Capital, would cause him to make good decisions, not bad ones, in dealing with the nation’s economic problems over the next four years.

The findings raise questions about Obama’s strategy of targeting Bain’s record in outsourcing jobs and hammering Romney for refusing to commit to releasing more than two years of his tax returns. Instead, Americans seem focused on the economy, where disappointment with the fragile recovery and the 8.2% unemployment rate are costing the president.