Humorous: Oprah gets slammed in India 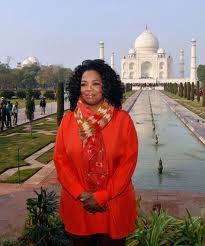 It's about time Oprah got her comeuppance. Kudos to India.


Oprah Winfrey's special program on India drew the ire of several Indian media outlets on July 21, who called the show "myopic, unaware, ignorant and gauche." The program was featured in the "Oprah's Next Chapter" series, which has the long-time talk show star traipsing around outside the studio for "enlightening conversations with newsmakers, celebrities, thought leaders and real-life families."

Her foray in India aired in the United States in April but premiered in India this weekend. The two-episode special featured a trip to some Mumbai slums, the Jaipur Literature Festival and the glitzy homes of Bollywood stars.

Winfrey was criticized for reinforcing exotic and backward stereotypes of India, particularly when she commented that she heard that Indians "still" eat with their hands.  "I don't know what people in America are eating their hot dogs, pizzas and tacos with but perhaps Oprah's home has evolved cutlery for all that," commented Rajyasree Sen, a columnist on Firstpost, an online Indian newspaper.