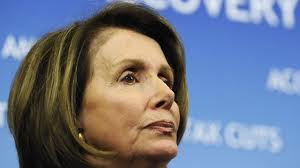 The smart thing for Democrats to do would be completely cancel the convention and nominate Obama by phone conference.


(Politico) — House minority leader Nancy Pelosi says that Democratic members should stay home and campaign in their districts rather than go to the party’s national convention in North Carolina.

“I’m not encouraging anyone to go to the convention, having nothing to do with anything except I think they should stay home, campaign in their districts, use their financial and political resources to help them win their election,” Pelosi said in an exclusive interview for POLITICO Live’s On Congress, a new weekly show to be streamed live on POLITICO’s website and broadcast on NewsChannel 8 on Wednesdays.

The California Democrat suggested that since Barack Obama is an incumbent, there is less of a need for Democrats to attend the convention.

I think Nancy is afraid that the most commonly heard comments at the convention will be " Yeah, I'm really disappointed in him, too!" and "What can we do about it?"

Seriously, who's going to be up on that podium...and what's going to be said... that any decent person or even a Democrat would want to be associated with?