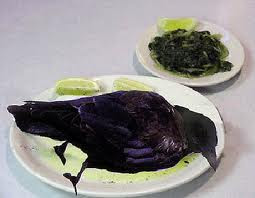 I wonder how the White House likes their crow cooked?


Barack Obama's White House has been forced to admit that it did return a bust of Sir Winston Churchill to British diplomats, after describing such claims as "100 per cent false".[...]

"This is 100 per cent false," Mr Pfeiffer said. "The bust is still in the White House. In the Residence. Outside the Treaty Room". Illustrating his statement with a photograph of Mr Obama inspecting it with David Cameron in 2010, he added: "Hopefully this clears things up a bit and prevents folks from making this ridiculous claim again".

British officials were surprised by Mr Pfeiffer's statement and photograph, however, because the bust now resides in the residence of Sir Peter Westmacott, Britain's ambassador to the US. Further inquiries led to the discovery that there are, in fact, two matching Churchill busts by Epstein... Keep on reading...

not exactly new news. Anyone who paid attention to the British press at the time knew, anyone who watched fox news[much as people hate it] at the time..knew. The British were absolutely livid.