Poll: Most Americans don't care if Romney is a Mormon and Obama is a Muslim... 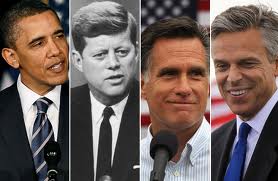 Religion isn't a decisive factor in the minds of voters anymore.


Sixty percent of voters are aware that Romney is a Mormon, and 81 percent say it does not matter to them, according to the poll by the Pew Research Center. The awareness level is almost unchanged from four months ago, during the Republican primary elections.
"Unease with Romney's religion has little impact on voting preferences," the Pew report said.
"Republicans and white evangelicals overwhelmingly back Romney irrespective of their views of his faith, and Democrats and seculars overwhelmingly oppose him regardless of their impression."[...]
Obama is a Christian but the view that he is Muslim persists almost four years into his presidency, with 17 percent of voters saying he is Muslim. Forty-nine percent say he is Christian, down from 55 percent near the end of his 2008 campaign, and 31 percent say they do not know Obama's religion.[...]

Overall, 45 percent of voters are comfortable with Obama's religion, 5 percent say it does not matter and 19 percent are uncomfortable.