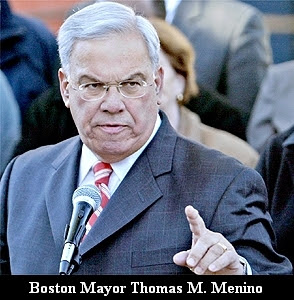 Boston Mayor Thomas M. Menino wants to use government to punish a company for expressing an opinion. Mayor Menino should read the 1st Amendment to the Constitution.


Boston Mayor Thomas M. Menino repeated today that he doesn’t want Chick-fil-A in Boston, but he backed away from a threat to actively block the fast-food chain from setting up shop in the city.

“I can’t do that. That would be interference to his rights to go there,” Menino said, referring to company president Dan Cathy, who drew the mayor’s wrath by going public with his views against same-sex marriage.

The mayor added: “I make mistakes all the time. That’s a Menino-ism.”

The Herald first reported last week that Menino warned “it will be very difficult” for Chick-fil-A to obtain licenses for a restaurant in Boston.

The Atlanta-based chicken chain has been eyeing a space near the Freedom Trail and across the street from City Hall, among other locations, for its first eatery in Boston.

“I sent (the landlord) a letter, but that’s all. There’s no pressure by me to allow this place to be rented,” he said.