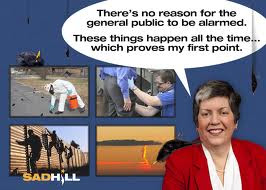 Janet Napolitano is doing everything she can to keep the border safe, except for effectively guarding it or building a fence.

At a July 25 hearing of the House Homeland Security Committee, Rep. Ron Barber (D-Ariz.) asked Napolitano: “As you know, Madam Secretary, there have been anecdotal reports about material evidence of the presence of terrorists along our southern border. My question is, is there any credible evidence that these reports are accurate and that terrorists are, in fact, crossing our southern border with the intent to do harm to the American people?”

Napolitano answered: “With respect, there have been--and the Ababziar matter would be one I would refer to that's currently being adjudicated in the criminal courts--from time to time, and we are constantly working against different and evolving threats involving various terrorist groups and various ways they may seek to enter the country.”

“What I can tell you, however, is that that southern border--the U.S.-Mexico border--is heavily, heavily staffed at record amounts of manpower, materiel, infrastructure and the like, and we are constantly making sure we're doing all we can to make that border as safe as possible,” she said.