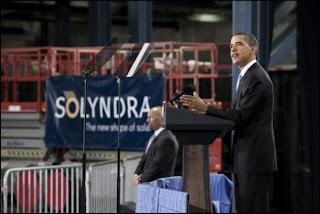 What do you get for giving a half a billion dollars in green money to a company headed to bankruptcy? You get a lot of campaign cash if your name is Barack Obama.


US President Barack Obama shook hands with some of his wealthiest supporters Tuesday night at a fundraising shindig in San Francisco. Also on hand, though, was a matter the commander-in-chief just can’t seem to shake: his failed deal with Solyndra.

Around sixty patrons paid $35,800 a piece to attend a party in honor of President Obama this week, including a pair of gentlemen who have become central figures in an energy debacle that has haunted the Oval Office since last year. Among those in attendance were two key players in the Solyndra scandal.

President Obama touted Solyndra, a California solar-panel start-up, as an example of perfect American entrepreneurship early on in his presidency. Last year, however, the infant green energy company filed for bankruptcy, despite the president earlier approving a gigantic loan guarantee worth $535 million for the Silicon Valley start-up. The company had borrowed all but $8 million of the massive loan before calling it quits late last year, a move that prompted Obama’s opponents to ridicule the president over what some said was “a dubious investment” and even initiated an investigated by the FBI.