Occupy San Diego occupied a bridge over I-5 in Clairemont last November. There is a man in the video who strongly resembles Aurora shooter James Holmes. The man is wearing black and what appears to be a bulletproof vest. Here is a capture from the video side-by-side with a known picture of James Holmes. 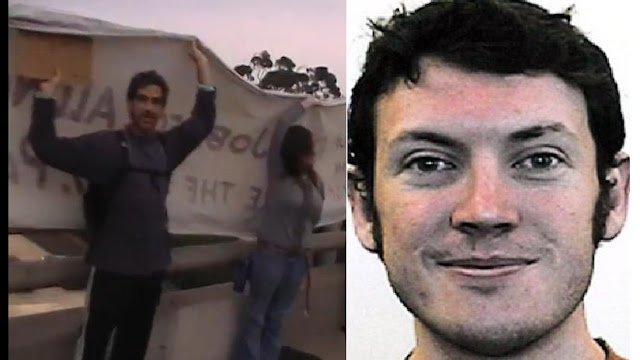 Here is the video. The vested man in black appears at the 23 second mark. You decide.


Reportedly, the suspected shooter was also wearing black and a bulletproof vest.

Update: There has been no evidence linking Holmes to Occupy San Diego. As one commenter noted, perhaps I should consult my optometrist.
Posted by Bluegrass Pundit at 1:40:00 PM

This photo of him looks like your video (2nd photo down) http://www.tmz.com/2012/07/20/batman-massacre-james-holmes-photo/

What is this, ABC?

No, not even close. What's the point anyway? Nonsensical rubbish.

This right here is some guy who looks vaguely similar. But a lot of guys look like that. He also owns a bulletproof vest and is associated with San Diego, but that's hardly convincing in itself. Let's not tar some vaguely-similar looking dude with the brush of the mass murderer until we have more convincing proof than this! Sheesh!

The guy in the video doesn't look a damn thing like him, you liar.

That man is not James Holmes. He is another man named Abe, who was active early on in the Occupy San Diego Education Committee

His mother said he was a leader in the occupy San Diego movement.!!!

Even the stupid private investigator has admitted that Holmes moved to Colorado since prior to the beginning of Occupy, and provided no evidence he ever returned to San Diego.

If his mother thinks he was a 'leader' in Occupy San Diego, which I doubt, that proves the internal inconsistent of this BS smear campaign: (1) there are no leaders, and (2) if he were an 'active member' at least one person who is active would be expected to know him, right? (no one does at OSD).

Nice try fascist bed-buddies of the right-wing blogosphere and the nat'l security state: you're paper thin smear campaign is crumbling into dust before your eyes...

Not even close by any stretch of the imagination!!

Your all a bunch of f-ing free loading trust fund f-tard clowns. You as in the fake ass occupiers. Not all "normal" people shy away from your lame asses. Try to occupy my city bitch and you'll understand how to get your ass handed to you.....

BTW- you ARE the 1% poser bitch. Your mommy and daddy pay for your overpriced university and all your BS toys. Your a puppet for the liberal ass clowns but your too F-ing stupid to realize it. How poetic

Where is Ed Shultz, the View morons, Anderson Cooper, Rachel Maddow and the rest of the idiots including All the politicians that say how great the occupier load of crap is? They must have missed all the rapes, murders, destruction of property. This is what people voted for?

Stand up and dont fear this idiots. Vote out the politicians including Obama. As for the occupiers fight with whatever it takes fists or minds. These puppets are a joke, we are the working class the true 99%. they are nothing but spoiled young adults and puppets for the communist administration. Time to stop these spoiled trust fund f-wads.

Is the suggestion here that all white folks look alike?? That is CLEARLY not the same guy. Get The @#$% Out of Here!

Who's on first regarding the ideological affectations of someone who is obviously crazy? Looking at this from a political focus is just as crazy as what Holmes did.

its a backpack for christ sake! and, they look nothing alike. seriously...

Maybe a visit to the optometrist would be in order?

Is it me, or is the hair in the video parted on the wrong side