Sen. Dianne Feinstein begins the slow walk back on comments WH was responsible for military leaks 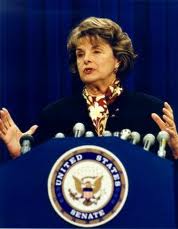 Sen. Dianne Feinstein is in danger of getting the Cory Booker treatment. Booker has been ostracized by the Obama administration for telling the truth.


Sen. Dianne Feinstein said Tuesday that she shouldn’t have speculated about leaks coming from the White House, walking back hear earlier comments that the White House was partly responsible for the leak of national security information.

The California Democrat, who chairs of the Senate Intelligence Committee, said she regretted speculating about the White House’s role in leaks relating to national security.

“I was asked [at the World Affairs Council on Monday] whether the White House might be responsible for recent national security leaks. I stated that I did not believe the president leaked classified information. I shouldn’t have speculated beyond that, because the fact of the matter is I don’t know the source of the leaks,” Feinstein said in her statement.

She had said at the WAC forum that she “think[s] the White House has to understand that some of this is coming from their ranks,” although she was careful to add that she didn’t think the president was behind the leaks.