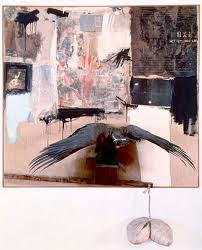 Our government is really stupid. Are all bureaucrats lobotomized as a job requirement?


The object under discussion is “Canyon,” a masterwork of 20th-century art created by Robert Rauschenberg that Mrs. Sonnabend’s children inherited when she died in 2007.

Because the work, a sculptural combine, includes a stuffed bald eagle, a bird under federal protection, the heirs would be committing a felony if they ever tried to sell it. So their appraisers have valued the work at zero.

But the Internal Revenue Service takes a different view. It has appraised “Canyon” at $65 million and is demanding that the owners pay $29.2 million in taxes.