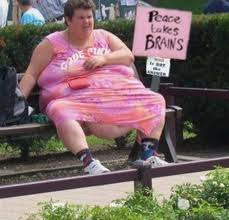 If only they felt as strongly about their brains...

Bring your Vagina to the RNC — CodePink.org


“My vagina’s furious and it needs to talk.” Our vaginas need to talk, too. They need to talk about the way women’s rights are threatened worldwide–from anti-choice legislation to inappropriate rape jokes to economic inequality to war and occupation overseas that disproportionately affect women’s lives.

Join CODEPINK and V-Day to bring your vagina to the Republican National Convention in Tampa, FL August 27-30!

Together, we will bring our resilient, creative, powerful vaginas to Republican fundraisers and to the convention hall. We’ll also take part in the Coalition March on the RNC and other peace and justice actions.