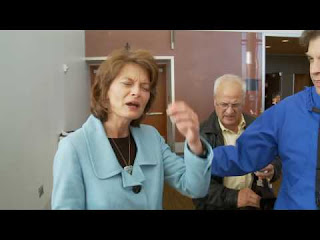 After coffee, donuts and a few tosses of the F bomb, the Alaska Libertarian Party decided Lisa Murkowski was too liberal to ever be a Libertarian. Any plans Murkowski may have had to pull a 'Charlie Crist' if the absentee ballot counting goes against her are doomed.

The Executive Committee of the Alaska Libertarian Party held an emergency meeting yesterday to discuss the contested primary results in the Republican Senate primary. All 5 board members met in an undisclosed location in northeast Anchorage to hammer out a decision as to how to move forward [...]

On Sunday morning, over coffee and donuts, the ExComm voted unanimously, 5 to 0 to deny the Senator the ballot line. There was no malice intended. ALP Chair Kohlhaas has repeatedly stated that she is a nice lady, and the ALP was flattered by the offer.